Time for Not COVID News

It feels like COVID-19 dominates the news cycle these days.  But there must be other things happening in the world, right?

Right!  And you can find some of them here, a place where COVID new is verboten and anything else goes.

Reason #134 To Avoid NYC in 2021:
Disease Transmitted through Rat Urine

While it's not a plague, New York City now hosts leptospirosis, a zoonotic bacterial disease with 15 cases so far in 2021.  While this sounds low, NYC averages around 4 cases per year, so this is a four fold increase.
While no one can state with certainty why there is a spike in cases now, theories abound with shout outs to climate change and weather.  What we do know is that the likely carrier is the humble rat, and the transmission method is rat urine.
So far, 14 out of the 15 people have been hospitalized, and one person died.

"Flesh-Eating" STI in the UK??

Who knew that Eddie Murphy could predict the future?  For those who have not seen Delirious, Eddie jokes that STDs were evolving from a simple rash to exploding penises.  While I know of no exploding penises yet, the UK now reports a spike in donovanosis, which appears to be a flesh-eating STI.
In reality, this disease causes:
If it is not treated properly, donovanosis can spread internally and can cause scarring. Oh, and proper treatment takes a minimum of three weeks, with a decent chance of the infection reappearing up to six months after what you think was an effective treatment.
Ugh, that sounds almost as bad as flesh-eating, doesn't it?
Anyway, doctors are urging people to use condoms, since that significantly reducing the chance of transmission.  To help spread the word, here are some slogans to encourage people to use condoms: 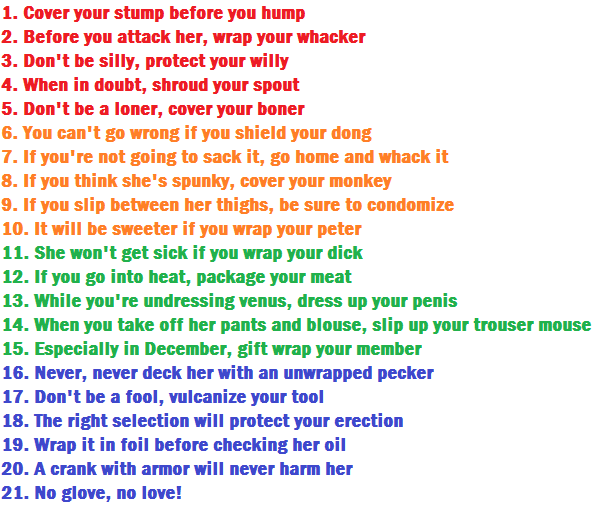