An 11-year-old girl put together this video as part of a school project.  I think she did a fabulous job, and I want to share it with you.
By Katfrog at December 18, 2013 No comments:

My Magazine Article is Out!!

A few months ago, I received an invitation to write for a new magazine, Secularite.  I accepted, and the first issue of the magazine when became available on iTunes yesterday!  I am amazingly excited about this, because I covered the origins of many Christmas traditions to the Romans as well as German and British pagans.

If you have a few minutes, please take a look and tell me what you think. 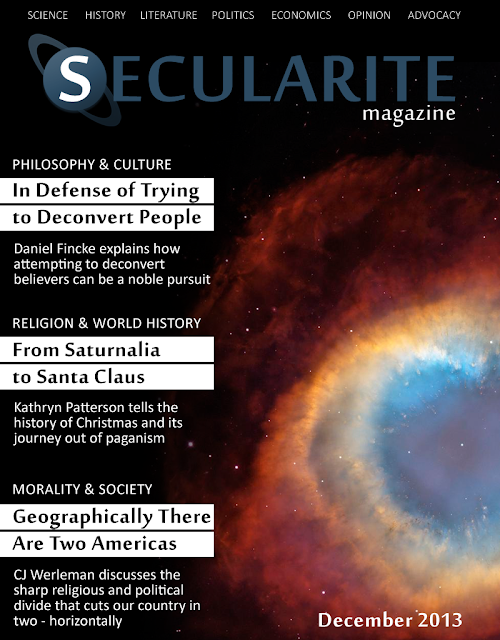 What Did the 113th Congress Do This Year?

Last week, I watched several comedians make fun of the current Congress, joking that the 113th Congress will make the Guinness Book of World Records for doing nothing.  I did a little research since then and determined two facts:

The 112th Congress was considered the least productive, because they only passed 283 public bills and 1 private bill.  So far, the 113th Congress has only passed 57 bills, and the House is scheduled to adjourn this Friday, December 13th with the Senate working until (tentatively) December 20th.

But numbers are not the sole indication of productivity.  A small number of important bills can get a lot of work done.  Let us analyze what these 57 bills do:

Most of these bills represent administrivia - administration work that needs to be done, but involves neither debate nor in depth effort.  Most years, I wouldn't blink at such bills.  But the list represents almost half of what Congress accomplished this year.

As for the rest of the bills?  Bill 113-7 nullifies part of the  Stop Trading on Congressional Knowledge Act of 2012 (STOCK Act), allowing congressional staff and executive branch employees to keep their financial trading private.  At least three bills (113-3, 113-6, 113-39) dealt with what to do when Congress doesn't pass a budget, but they never did pass a long-term budget.  Eight bills dealt with the military and veterans, but no where did anyone acknowledge the war these men and women are currently fighting.

If you read the first article of the Constitution, it is the responsibility of Congress to raise and manage funds for the U.S. government.  In other words, it is their job to create a working and balanced budget.  Yet both the House and the Senate spent an extraordinary amount of time doing anything except that.

Yet, these number do not tell the whole story.  This year, the House introduced 3,664 bills while the Senate introduced 1,777 bills, for a total of 5,441 bills introduced.  That means just over 1% of all legislation got approval by Congress.  The average for other Congresses is around 5%.

As for Presidential vetoes?  President Obama has only vetoed two bills, both in 2010.  He has not vetoed anything that made it to his desk this year.

Standing back, a picture emerges of a new political dynamic in Washington.  Where before the numbers showed a division between Congress and the President (President Clinton issued 36 vetoes), now you can see the division in Congress itself.  Unable to work together, Congress itself holds back the functioning of the government, with its inability to create a working budget and its inability to compromise.

To quote a friend of mine, it's time for the member of Congress to put their Big Boy (or Big Girl) pants on and deal with it.  Their country needs them to stop in-fighting and start doing their jobs.
By Katfrog at December 11, 2013 No comments:

This is a color-enhanced image of a hexagonal jet stream around the north pole of Saturn.  The winds in the hexagon jet at more than 200 m.p.h., with a diameter of over 20,000 miles.  To put this in perspective, the Earth's diameter is less than 8,000 miles.  To learn more about this storm, read the story at NASA.

Bad-Luck Theft of the Year

Earlier this week, some thieves in Mexico hijacked a cool-looking truck with an attached crane.  I don't know this with certainty, but I bet the crane attracted the thieves more that the truck itself.  Anyway, unbeknownst to the thieves, the crane was needed to move the sealed cargo on and off of the truck.  But the cargo itself?

That's right - these unfortunate men accidentally stole radioactive material, exposed themselves to the radiation, and then dumped the truck and cargo in an abandoned field.  As of this moment, the Mexican authorities have not apprehended the thieves, but no one is worrying because they will die from exposure soon.

When I first heard of this story, speculation accompanied it that the thieves were going to make a dirty bomb with it.  I actually laughed out loud at this because all the details pointed to a crime of opportunity, not a carefully planned outing.  I also knew that once they opened the box, the people would be dead, and not in a pretty way either.

The Syrian War, the U.S., and Human Rights Violations

The UN came out with a less than stunning announcement this week - the President of Syria knows about the war!  *gasp*  Okay, the announcement was that the U.N investigators traced knowledge of torture and other activities classified as war crimes to the "highest levels" of the Syrian government.  Let's be candid here - we all know that the highest levels of government know what's going on.  President Bashar al-Assad is no fool; he knows what is going on.  Which makes me wonder - why the secret list of suspects from the U.N investigators?  Why act as though President Assad knows nothing?

Because the U.N wants to try him on these war crimes, along with any other official high enough in his regime.  I have heard people in the U.S. among those calling for trials.  Again I wonder - what would these people say if the U.S. were called to account for its violations of human rights?

I will not go over the list of violations, because either you know about them and believe they happened, or you watch Fox News.  But the U.S. has trampled over our own citizen's human rights again and again these past 13 to 14 years, as well as flat out acting ignorant about non-citizen's rights.

So who are we to start pointing fingers and judging people in Syria?

I do not agree with any of the tactics that President Assad has taken to stop the rebels, from starving neighborhoods to using chemical weapons.  But I also don't agree with our soldiers being given orders to man checkpoints in Baghdad and to shoot anyone trying to cross without following strict US rules.  A pregnant woman trying to drive to the hospital died because she was focused on one thing - having her baby.  I don't agree with the border patrols who made immigrants eat marijuana and then left them with no shoes and no jackets in the desert at night.  I don't agree with New York police stalking journalists and believing they have the authority to stop anyone they want despite the Fourth Amendment.  I don't agree with Miami police breaking cell phones to destroy pictures of the policemen abusing their power.  And I don't agree with anything at Guantanamo Bay.

I apologize; I said I wouldn't list our human rights violations (I didn't even cover a tenth of them) but I need to make a point.  The U.S. lost the moral high ground long ago, and it feels like the pot calling the kettle black when our government says to Syria, "Naughty, naughty".

The worst part about the situation is our government has the point to stop the war using diplomatic channels.  If we worked with Russia and offered concessions to get Russia to stop protecting Syria, the entire war would stop relatively quickly.  And our government could have done this two years ago, last year, or six months ago.  Yet, we won't because of pride and prejudice.

How many more need to die before we do the right thing?
By Katfrog at December 04, 2013 No comments: