Are We Headed Into World War Three?

For the past few years, news of Syria and its civil war flitted in and out of the headlines.  Sometimes I read the news; sometimes I felt too depressed about the situation to read.  But this past month, the conflict went from an internal, civil war in one country to a potential global war, with Russia lining up on one side and the US lining up on the other.

As a fan of history, the situation reminds me of Europe before World War I.  We have groups of allies on separate sides of a conflict, each waiting for the other side to make a move.  Only now, the use of chemical weapons takes the role of the assassination of Archduke Ferdinand.

Which makes me wonder - is this it?  Will we blindly ignore history and go in, guns blazing?  Russia already sent two warships to the Mediterranean Sea and Iran stated its intention to help out should the United States or the UN choose to retaliate against Syria with military force.

And I don't think we want the American military in Syria anyway.  Between 100,000 and 600,000 Iraqi civilians died when we invaded Iraq.  Almost 5,000 soldiers died in Iraqi, and over 3,000 soldiers died in Afghanistan - that means over 8,000 American soldier have died in that past 9 years.  This number doesn't include the wounded soldiers (over 50,000), the soldiers who snapped and committed suicide (hundreds every year), or the soldiers who now live with PTSD and will continue to live with it.  Forever.

Just this month, Army Staff Sergeant Bales got a life sentence for killing 16 Afghan civilians in March 2012.  I've heard people describe the man as a "cold-blooded killer", but his actions scream of a man who was pushed too much and snapped.  According to his testimony, Bales went out, killed people, ran out of ammunition, came back to the base, and told someone what he was doing.  Sane people try to hide what they are doing, if they know that they are doing something wrong.  Insane people don't feel the need to hide their actions.  In some states, that is the legal difference between sanity and insanity.

Bales represents a no-win situation - the people who died in that Afghan village deserve justice.  But Bales was not sane when he went on the massacre.  Yet he needs to be held accountable for his actions.  But who will hold accountable the federal government, who sent this man on four tours of duty in a combat zone?   Because I guarantee he would not have killed people if they didn't send him on the fourth tour of duty.

School's Back! A Parent's Guide to Surviving the Start of School 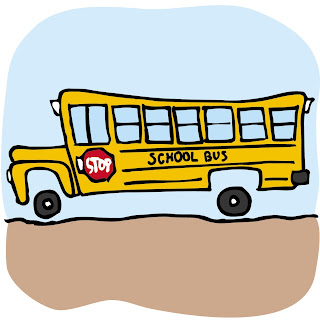 As summer rolls to an end, the call of the school bell begins to ring out all over the nation.  Here in Cobb County, students started school last week.  Cherokee County started August 1st, and I know of places elsewhere that start in the next week or two.

And as kids board their school bus, parents begin to panic.  Will my child do well this year?  Will he make friends?  Will she like her teacher? What if the teacher can't teach my child?  What if there is a bully in the classroom?  What if a gunman bursts into the school building and hunts my child down like a rabbit?  What if aliens blow up the school as a sign of their hostility?

There is a commonality among all but one of these questions:  there isn't a thing you can do to prevent the situation.  You cannot hover over your child's shoulder during the school day providing personal tutoring or helping him/her make friends and learn how to like the teacher.  Nor can you screen every person your child will meet during the school day and magically remove anyone who seems like a bully.  As for gunmen and aliens?  Chances are equal for both to show up, and in either case you cannot stop them.

The one situation you have direct control over is your child's teacher.  If your child has the misfortune to actually get a teacher that doesn't work out due to a personality conflict - a rarity in my experience - you can get your child switched to a different classroom.

Everything else is out of your direct control.  But indirectly?

You are the most important influence in your child's life at the moment, from elementary school to somewhere in middle school.  Then, you get downgraded to merely an important influence.  In any case, you can help your child not by trying to pave the road in front of him, but by teaching him how to drive.

I like this particular metaphor because it works on more than one level.  Learning to drive inside the lines equals learning how to act in a social setting.  It is inappropriate for anyone to stuff toilet paper rolls down a toilet and then flood the bathroom by repeatedly flushing the toilet.  It's also inappropriate to run around school naked or half dressed.  These are outside the line behaviors, and the vast majority of kids know this before kindergarten because their parents taught them how to drive inside the lines.

Potholes represent both choices your child has to make and things that happen outside her control.  Your child needs to learn how to make her own decisions and make her own mistakes - the earlier the better because the older your child gets the more severe the consequences.  As parents, we need to start letting kids make their own decisions at an early age without using our power to override their choose.  For example, let your kindergartner pick out which clothes to wear to school. As long as the outfit follows the school dress code, keep your mouth shut about what you think would be a better choice.  I would go so far as to discuss the dress code before the start of school, and then stay out of the way.  If your child wears shorts in the winter and freezes at recess, so be it.  No one died from getting a little cold.  If you live in a place with real snow and cold temperatures (we have neither here), maybe you discuss sending along long pants for outdoor time.  But let your child learn. Sometimes, the best way to learn is to make a mistake and then live with the consequences.

As for bumpy roads, they represent life events that happen outside you or your child's control, events that they will have to deal with.  See another person getting bullied?  Find a wallet on the ground?  Get a flat tire on the way to school? Witness someone having a temper tantrum?  How have you taught your child to handle these situations?  And I don't necessarily mean what conversations you have with your child (though conversations are valuable).  Parents are the first and foremost role models for children; they will do as we do regardless of what we say.

So use your power wisely.  Everything will work out in the end.  Really and truly.
By Katfrog at August 12, 2013 1 comment: