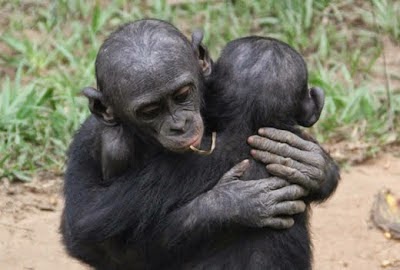 Just a thought for today....

This weekend, I watched the first few minutes of the documentary "Blackfish".  I had to stop at the part where Seaworld captured wild orcas and separated the babies from their mothers - the whole process makes me so angry!

Before then, they showed a segment where Whoopi Goldberg commented that we don't speak the languages of other animals - not whale, not tiger, not dolphin,...

But other animals have learned to speak our language.  Bonobos, for example, not only understand and speak English, they are advanced enough to hold conversations with us while hosting tea parties. Chimpanzees and gorillas learned sign language and communicate just fine.  Dolphins and whales also seem to understand us more that we understand them.

Makes me wonder how smart humans really are.
By Katfrog at September 29, 2014 No comments: Feminism - a four syllable word that lacks a decisive definition, evokes emotions from absolute devotion to absolute hate as well as everything in between, separates families, brings together communities, and occasionally creates bursts of chaotic debate on the political scene.

There is even debate as to who first coined the term "feminism".  Some people credit French philosopher Charles Fourier with creating the term in 1837, while the Oxford English Dictionary lists its first appearance in 1895.

Despite the history of feminism, I face the question of whether or not I want to call myself a feminist, especially after the controversy with Emma Watson.  The hatred and vitriol spewed towards her for speaking about equality among men and women is daunting, and I wonder if such a response would have happened if she said the same things, just not under the 'feminism' banner.

You see, I believe something quite similar.  I think that women should have equal access to opportunities; albeit I firmly believe that the majority of women will not use the opportunities like men do.  Why?  Because men and women are wired differently from somewhere around the eighth week after conception and on.  We don't think the same way; we demonstrably don't feel the same way.  We generally want different things out of life.

But the majority does not mean every individual.  Some women want to climb corporate ladders, fix cars, do extreme sports, become neurosurgeons, or whatever field where men currently dominate.  That's where I think we need to have the opportunities for the women who want to put in the time and effort to succeed in these fields.

However, I have a problem with the way most feminists judge success - money.  All of the studies that I've seen where women are compared to men use salary as the gauge.  But what about the non-tangible rewards?  Maybe a woman is paid less because she doesn't work as much overtime, instead she goes home to her family to strengthen her family bonds.  That in itself is a reward - a huge reward to some of us.

Years ago, I worked in the tech field.  I quit my job when I moved in with my husband, because he had a son from his previous marriage who needed someone at home to take care of him.  I thought long and hard before taking that action, but I never regretted putting family before career.  While this lead to a substantial cut in pay, it also lead to a substantial increase in happiness for me and my family.

I think we need something else to measure to determine equality, not simply money.

Feminist levee hatred and vitriol towards me because I used the choice of career or family, and I chose family.  I cannot tell you how many times I have fielded dumbfounded questions from a feminist asking, "How could you quit your job?  Especially over a stepson?"

I'll spare you the rant I've developed over the years, and just say that a choice is not a choice if a person must pick only one answer.

So, while I am all for equal opportunities for men and women, I think I'll pass on feminism for now.

"Alien Imposters" by Key and Peele


Okay, this is supposed to be my Wordless Wednesday contribution, but seeing as how this is a video and I'm commenting on it, it's not really 'Wordless'.

First, you need to watch the video.  Go on, I'll wait.

Now, I admit I like Key and Peele.  They are incredibly intelligent and humorous, and all of their skits that I've seen have underlying, serious messages.

This video is no different.

While laughing at how the men determined who was an alien, I also cringed because our society still has a large streak of racism that permeates basically everything.  The problem is I don't know of a way to get rid of that racism.

I think part of the problem will (sorry, Mom and Dad) die off with older generations, people who grew up before the Civil Rights Movement.  I know a lot of older people who try to overcome their racism, but it's difficult to change something that's based in childhood.

But what about newer generations?  Are we still teaching racism without meaning to?

I hope that by pointing out the absurdities of racism younger generations will learn to treat everyone as equal.  Not separate, just equal.  I think that's how the social prejudice against homosexuality have receded.  I know my own kids don't understand why anyone even cares if a person is straight or gay.

I guess I want a faster answer than "When enough time and generations pass, racism will die out."

Until then, I'll laugh (and cringe) at Key and Peele.

While drones normally bring up mental images of secret military operations and hoverbikes seem very back to the future, several companies are attempting to create these vehicles for commercial and personal use. A drone might someday show up at your house delivering a package; or you might one day race your friends across a beach on a hoverbike.  It all depends on how fast the technology develops and if we can overcome some inherent problems.

Well, it's more that Google built some for their latest from Google X - Project Wings, a new drone delivery system.  For those who don't know, Google X is a division of Google that attempts to do the impossible.  They experiment with crazy ideas, learning along the way.  By "learning along the way", I mean that Google doesn't expect all the projects to succeed; they know that a lot will never make it out of the lab.  But by allowing their people to try, Google also allows them to shine when they get it right.

Google went to Australia (after being shot down by the FAA) to test their new drones.  Boasting four propellers and the ability to lift off and land like a helicopter and fly like an airplane, these drone provide a cargo hold that carries about 3 lbs. worth of small items.  Currently, Google planning on deploying these drones to disaster areas where the roads are impassable.  The drones can be used to transport small but extremely useful items, such as medical supplies, medication, or batteries.

Turning science fiction into science fact, several companies are working on creating real hoverbikes.  While hoverbikes might one day become aerial ATVs, currently it is impractical to create hoverbikes that would be usable as everyday transportation due to the physics of the situation.

You see, the designers need to balance the weight to power ratio.  The more a hoverbike weighs, the more power it needs to lift off and hover.  But power comes with batteries or a fuel tank, which in turn add to the overall weight.  Currently, a normal-sized person can only ride a hoverbike for 45-85 minutes before needing to refuel or recharge.

Plus, hoverbikes are extremely loud (due to the turning rotors), unable to make a sharp turn, and prone to drifting in a strong wind.

Despite these obstacles, Aero-X and Malloy Aeronautics plan to release recreational use hoverbikes in the near future.

Malloy Aeronautics, a UK-based engineering company, has created an actual hoverbike, and it looks even better than the hover boards from "Back to the Future".   Last month, Chris Malloy even ran a Kickstarter to finance their drone project - a ⅓-sized replica of the hoverbike, complete with a ⅓-sized replicate driver.   The following video from the Kickstarter project shows both the hoverbike and the drone in action:

The other big company in the hoverbike market is Aerofex. You can buy their hoverbike, the Aero-X, for delivery in 2017 today, with a variety of colors and features to choose from.  They even offer whole vehicle air bags, for those worried about safety.   To work properly with the FAA, Aerofex limits how high you can hover to 12 feet off the ground (though to be honest, I'm not certain how they are implementing this).  Any higher and you need a pilot's license.  Aerofex released the following video, showcasing what their hoverbike can do.


I've heard talk about using hoverbikes in emergency situations, to get help places where roads are not available.  But the limited flight time makes me doubt how useful a hoverbike would be.

Otherwise, I can't wait to see where the next level of recreational transportation takes us.

Wordless Wednesday: The 10 Commandments of Logic 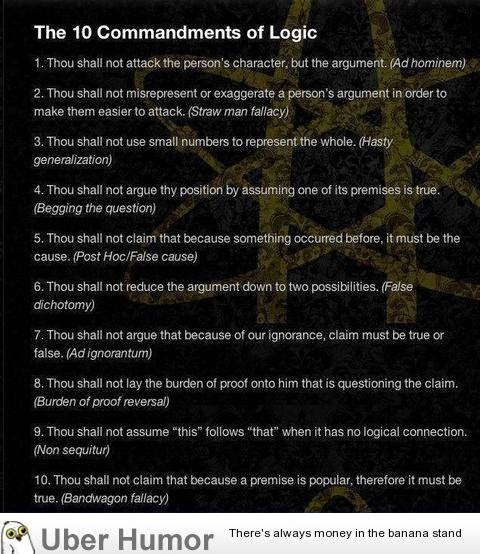 I'd like to take the time to thank all of the laborers in the U.S. for helping to make our country better.  By "laborers" I mean everyone who does a dirty job, everyone working in a factory, everyone working on garbage trucks, the postmen, the delivery guys, road workers, construction workers, mechanics...

You get it done, and you do it well  Thank you. 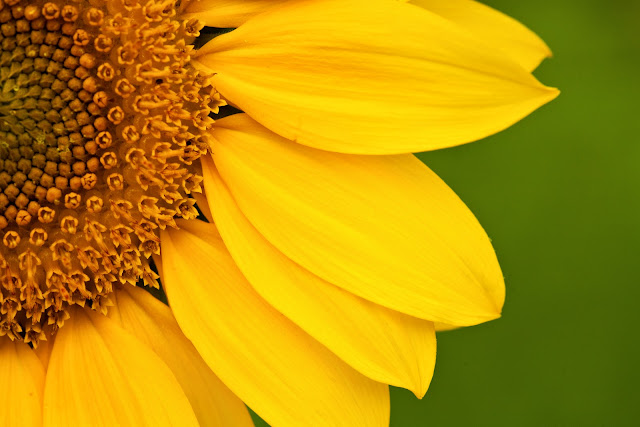