Tacos - a wonderful handheld food that Americans eat by the dozens

As the American melting pot grew in the early 1900s, tacos became a staple of American diets in the Southwest. During the last century, this food moved across the country until nearly everyone in the country has eaten at least one taco during their lives and many restaurants even advertise Taco Tuesday every week.

In 1968, Congress officially recognized the importance of tacos, saying:

On May 3rd of every year National Taco Day will be observed, in honor of the birth date of the great Texan and American, the Honorable Henry B. Gonzalez, Congressman of Bexar County and San Antonio. The highlight of National Taco Day will come on the night of May 3rd, at which time a celebration will honor the birth of a new era for the Taco and the Mexican Food Industry.

So why are we seeing images for National Taco Day now, on October 4th?

Because in 2009, Del Taco set up a marketing campaign the celebrate a "National Taco Day" on October 4th.  I have absolutely no idea why they decided to create this campaign, but it both worked and didn't work.  You see, I have heard of National Taco Day in October, but I had no idea where this idea came from until I did some research.

So which National Taco Day is the "real" one?

Back in 1989, Taco John trademarked the name Taco Tuesday. For decades, the business defended their trademark against others, though in the end it was all for naught.  Nowadays, plenty of restaurants advertise their own Taco Tuesday since the term is now considered  "a commonplace term, message or expression widely used by a variety of sources that merely conveys an ordinary, familiar, well-recognized concept or sentiment." by the United States Patent and Trademark Office [citation].

I don't know how many of you remember when the Spin Doctors first hit the scene, but I do. I remember gong out to clubs or bars and dancing to these high-energy songs while singing along.
Like a lot of bands, Spin Doctors released a hugely successful first album and then never managed to match that success with their following albums.  Mind you, the music is still exceptional. It just never became as commercially popular as A Pocket Full of Kryptonite.
Chris Barron, singer and songwriter, still sings with the band. But he also does some solo work. I re-discovered Chris Barron in the 2010s, when I bought the album Songs from the Summer of Sangria off of his BandCamp website. The music is more chill but just as thoughtful as his Spin Doctors music. And I recommend listening to it when you want to just kick back and let life flow.
By Katfrog at October 04, 2022 1 comment:

Music Monday: The Bright Side of Life


I didn't see "Life of Brian" until I was almost 50, and I laughed so hard I almost peed my pants. This particular song is one of my favorite earworms.

The Questionable Morality of America, part 1

"the matter boiled down to simple morality: innocent prisoners ought to be freed"

Have you ever wondered how the normal, regular people living in Germany in the beginning of the 20th century followed and supported both the Kaiser and Hitler into brutal, terrifying wars? I'm not talking about the zealots; I mean the average citizens living average lives.

How could these people reconcile the atrocities done with their own moral code?

I wondered about this since I first learned about Hitler and the concentration camps through reading books by Corrie Ten Boom and Anne Frank. As a child, I assumed that everyone had roughly the same morals as I did, and I could not imagine standing by as people were herded into train cars.

As a young adult, I traveled to Germany and stayed with friends of my grandmother. This couple was alive during World War 2, young adults during that time, but I never got the courage to ask them what happened. I can tell you that these people welcomed me into their home, showed me around West Germany, and were kind and caring individuals.

Sadly, I think I have an answer now. It's not that the German citizens were temporarily turned into monsters, or had secret brain surgery. They simply were faced with questionable morality of their society, and their own moral spines bent.

It's the same thing that is happening in America today.

I should not say "today" as if this is a new thing. America has never had a shiny moral spine.

It started with our Independence, when our Founding Fathers compromised and allowed slavery even though the majority of them did not feel that slavery was morally correct.

Our Founding Fathers and Slavery

Our entire country almost split into two with the Civil War, but even that did not stop discrimination against people who are not of European descent.

But racism isn't the only place where America's lack of morality shows. During Prohibition, the federal government poisoned whatever alcohol they could, with the pretense of "stopping people from drinking". But government officials knew that this would not stop anyone from drinking alcohol. They just did not care how many people died from their poisoning.

Because I never heard about this particular atrocity in any of my history classes.

After World War 2, McCarthyism took over during a time we now call the Second Red Scare.

McCarthyism
noun
the practice of making false or unfounded accusations of subversion and treason, especially when related to anarchism, communism and socialism, and especially when done in a public and attention-grabbing manner.
That's right, folks. Senator McCarthy used a campaign of fear to temporarily control the American public.
During the 1960s, black Americans finally got fed up with being treated like second class citizens, and pushed for equal civil rights. Instead of supporting what is (in hindsight) a righteous cause, many white Americans either sat by and did nothing to help, or put on white robes and tried to terrify black Americans into being quiet.
In 1964 we also learned about the "bystander effect" when no one intervened to help Kitty Genovese when she was raped and murdered in public. Some people did try to call the police, but no one physically helped out.
I assume I do not need to keep listing the ways in which the American government or the American public has shown immoral activities or beliefs from the 1960s until 2016.
So what happened in 2016?
In 2016 the world learned that a large segment of American society does not have working ethics. These people laugh when someone makes fun of a handicapped person. These people encourage below the belt comments in conversation, and accept having double standards as the norm.
The world learned to be dubious about any agreement with our country, because there is no guarantee that the US will uphold their end.
The world learned that racism is still a problem here, as a police officer - who is tasked with public safety - knelt on the neck of a black man because he was black.
George Floyd died. No amount of jail time or fines will bring him back to life.
And the American public stood there and watched.
Police officers lied to a judge to get an arrest warrant and then killed Breona Taylor.
And the American public did nothing.
A group of Americans, emboldened and encouraged by the sitting President, invaded Congress in an act of sedition.
And the American public stood there and watched.
A SWAT team in Albuquerque burned an innocent teenager alive in a house.
And the American public did nothing.
Okay, to be fair, the death of George Floyd and Breona Taylor did cause some uproar afterwards. And there are trials against the people involved in the attempted coup. But even with the uproar and the trials, there have been no substantial changes for the better.
It feels like America not only lost the "moral high ground" in world relations, we lost our morality. Yet if you ask people if they think they have morals, most (if not all) would answer "yes".
Read the next blog post for a discussion on why Americans seem to have lost their morality.
By Katfrog at September 29, 2022 No comments: 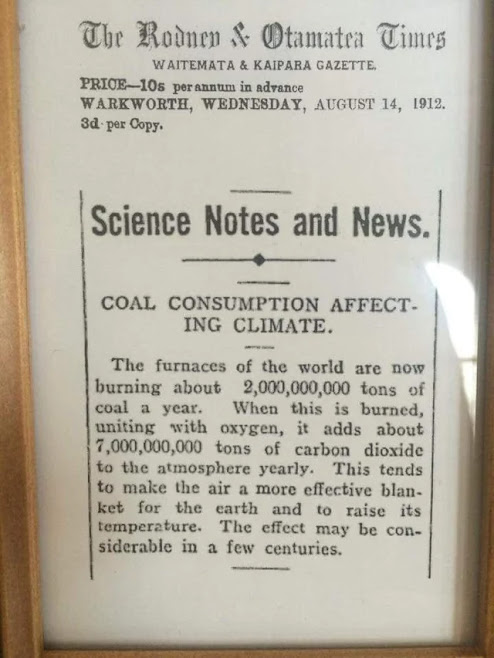 An Australian newspaper, The Rodney and Otamatea Times, reported about how coal consumption effects the climate back on August 14, 1912. The only error in the article is that it would take a few centuries for the temperature to rise.
By Katfrog at September 28, 2022 No comments:

Last month, my dear husband and I went to see Reina del Cid in concert here in Atlanta. One of the last songs she sang was a cover of Janis Joplin's "Lord won't you buy me a Mercedes Benz", but with an extra verse asking the Lord for a new guitar.

This got me thinking about what that song would be if Janis wrote it today. These days, housing is hard to afford. So I wrote a new verse to this classic.

You can listen to me singing it on SoundCloud.
By Katfrog at September 26, 2022 No comments: