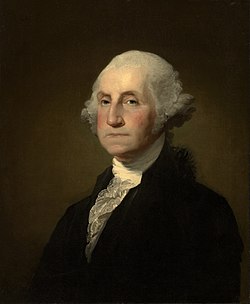 Today is the anniversary of George Washington's birth on February 22, 1732.  Most of the United States celebrates this birthday on the third Monday of February during the holiday known as President's Day.   But have you ever wondered how this holiday came to be?

In A Small Tangent...

The result is that George Washington was born on February 11, 1731 in the Julian calendar.  But February went from the last month of the year to the second month of the next year, George's birth year changed from 1731 to 1732, while the day changed from the 11th to the 22nd.

George Washington died on December 14, 1799.  The next February the entire nation mourned his loss, as most of the people saw Washington as the most important figure in the nation's history.  From there, it became an informal tradition to celebrate Washington's birthday until 1879 when an Act of Congress made February 22nd an official holiday for all federal offices in Washington D.C.  In 1886 Congress extended the holiday to all federal offices in the country.  Then on January 1, 1971, the Uniform Monday Holiday Act went into effect, creating President's Day on the third Monday of February in an attempt to honor all presidents.

But to base a holiday on Washington's birthday and then insure that it never falls on that day?