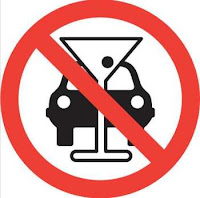 The very first Labor Day weekend that we spent in Georgia was sadly memorable.  My husband worked at The Weather Channel for a nice guy named Scott.  Late Saturday morning, Scott was riding his motorcycle into work when a car struck him.  The driver was a very drunk woman - amazingly drunk considering the time.  Scott left behind a wife who needed to wear a wig to the funeral because she was on her third bout with cancer, and a daughter about the age of 10.  Considering the wife's bad life expectancy, I hope the daughter is okay.  But we had a new baby, our own 8 year old, and a new house to set up, so I never knew what happened to her.

Fast forward six years, and I'm at home with my three-year old daughter, wanting for her six year old brother to come home from school.  Looking out the dining room window, I see a strange minivan in our driveway.  The driver's door opens, but no one comes out.  The entire situation gives me the creeps, so I call 911 and wait what feels like forever for Cobb County Police to show up.  (Truthfully, the police officer arrived in less than three minutes; it just felt much longer.).  It turns out the strange minivan belonged to a man so drunk that he fell asleep between opening the driver's door and getting out of the van.  The man swore he was in his ex-wife's driveway, because he was too drunk to notice that he was nowhere near his ex-wife's house.

If that man showed up 15 minutes later, he would have been driving on the road with the school buses and all of the elementary kids.

Lately, I noticed several commercials telling people that buzzed drinking is the same as drunk driving.  When I see these commercials, I think about Scott, his widow, and his potentially-now-an-orphan daughter.  I think about the man in my driveway, who couldn't walk a straight line.  I think about how many people go out to drink and never plan ahead.  Everyone knows that alcohol impairs judgement, so why don't people make their plans for getting home before tasting that first drink?