Revelations about Organic Food??? Not Really. 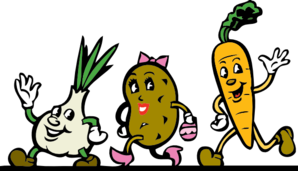 Stanford University released a study this week, in which researchers there correlated the data from about 240 other studies on organic versus non-organic food.   The good people at Stanford discovered that organic foods do not provide a nutritional advantage over non-organic;  but organic produce does test for approximately 30% less pesticides that traditionally grown produce.

While I read several opinions of shock over the finding, personally I think it falls in the "no duh" category.  The amount of sunshine and water plants receive, as well as soil quality, determine nutritional value of fruits and vegetables; pesticides... well, not so much.  The chemicals keep bugs and such off the plants, but don't really add or subtract anything otherwise.

So why do so many people think that pesticides change the nutritional content?

I have no answer to that question.  Maybe the belief stems from our removal from the growth process; generally speaking people don't grow their own food anymore.  Maybe it's the media repeating how much better organic food is supposed to be; it something gets repeated enough people tend to believe it.

As for pesticides, both organic and non-organic had levels below the regulated standards.  Of course, now people are arguing over the standards, but that's another story.