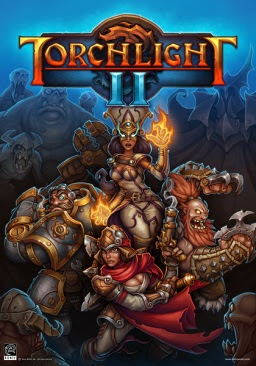 Last Thursday, Runic Games released Torchlight II - an  action RPG that follows in the footsteps of Torchlight.  As a big fan of Torchlight, I prepurchased Torchlight II months ago on Steam and then forgot about the game instead of checking everyday for the announced release date, which was my first impulse.  But I could try and put it out of mind, ergo outside of the compulsive wondering zone, because Steam announces new releases loudly, so I knew that I would not miss the date.

Not only did I not miss the date, but I finished the main quest line of the game two days ago.

I love this game!!!  The creators of Torchlight II managed to carry over the great gaming aspects of Torchlight while changing the few elements that needed changing (an open world to walk around and explore, different character types, more pet types,...)  The best part is that even though I finished the main quest line, the game offers significantly more gameplay; I am not even close to finishing the game.  How, you ask?  After finishing the main quest line, you have two options:


These options mean that the game continues on well after you finish the main quest, but it feels like regular gameplay.

As for playing the game itself, here are what I consider the main good parts:
So far, I haven't run into anything I don't like.  Okay, they don't have a tutorial, which might be bad if I didn't play the original Torchlight.  But they do prove tips during gameplay for beginners, as well as a "Casual" mode.

Otherwise, I love this game!  And I'm looking forward to playing more Torchlight II in the near future.