I'm Thankful for... Emperor Justinian I 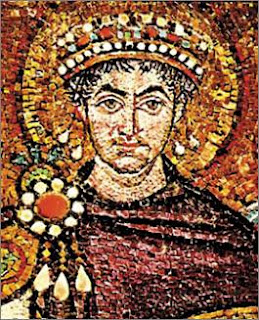 Yes, this does not sound like something most people would be thankful for - a pre-Middle Ages emperor of the Byzantine Empire who died in 565 AD.  But the ideas that this man, this son of a shepherd, put forth have influenced the world even to today.

For Emperor Justinian I believed in justice and the law; he created a uniform Roman law (based on previous laws) and wrote it down in Corpus Juris Civilis. (Okay, he probably had his officials write them down under his orders.)  This work has been and is the basis for most civil laws from Justinian's empire until today.  He offered scholarships to anyone who wanted to study the law (not just from the upper classes).

While Emperor Justinian I contributed much to his time and posterity, I believe the following ideas are his
greatest contributions:

Now, Emperor Justinian I also build a few monuments, won back parts of Africa, Italy, and Spain from invading forces, consolidated the empire, and married a woman with an unsavory background (showing a distinct lack of concern where social norms stood on such matters).  But the concept that a person is innocent until proven guilty, that outweighs everything else in my opinion.

Human nature is to assume someone is guilty if that person is accused of a crime, unless there is overwhelming proof of innocence.  To overcome this internal prejudice, we have to consciously assume someone is innocent, and have that notion pressed upon us in times of a jury selection or of a trial.  But without someone in power who enforces this assumption, without someone like Emperor Justinian I to write down this idea, codify it and enforce it, I do not believe we would be the same world.  We would live in a world that believe it's better for an innocent man to go to prison then for a guilty man to walk away free, which contradicts my belief that it is better for a guilty man to walk free then for an innocent man to go to prison.

As for the first three ideas, they all contribute to making the law fair for everyone and to remove the influence of money and riches over the judgement of the courts. I realize that money and power still influence the court system, even today.  But think about how much worse this could be without Emperor Justinian I.
Posted by Katfrog at 11/21/2012 01:58:00 PM