This week, Vladimir Putin issued a presidential decree granting Steven Seagal citizenship in Russia.  I know that may sound like a plot to one of Seagal's B grade action movies  But this happened in real life.  Seagal and Putin have been friends for years, with Seagal calling Putin "one of the greatest world leaders alive".

For some reason, this news did not surprise me as much as Tina Turner becoming a Swiss citizen.

Earlier this summer, the Lincoln Park Zoo decided to name its newest camel after one of our founding fathers and a Broadway hit musical.  So I present to you, Alexander Camelton! 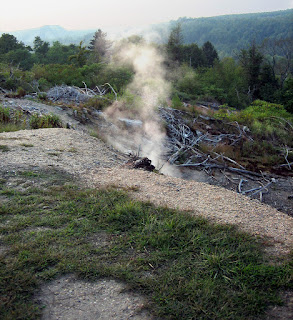 Back in 1962, a fire started next to the coal mine in Centralia, Pennsylvania.  Firefighters worked to put the fire out, but it spread to an open seal of coal.  Suddenly, it became a lot harder to fight.  Eventually, money ran out and the firefighters quit.  The fire spread to the entire mine, but no one worried about it until 1981, when a sinkhole from the fire almost swallowed up a 12 year old boy.
The government relocated the vast majority of people in the 1990s, tearing down the buildings and leaving behind a ghost town.

Side note for gamers:  The look of Silent Hill is partially derived from Centralia.

Now less that 12 people live there.  They claim that the fire is not a threat anymore.  But it still burns.  According to scientists, it might burn another 250 years before going out.