Justice is not Truly Blind


Brock Turner, the rapist from Stanford University, was released after serving three months of his six month sentence.  Yes, I said he only had a six month sentence, even though he was found on top on an unconscious woman he'd dragged behind a dumpster.  For the entire sordid story, go to BrockTurnerRapist.com.

What I want to talk about today is the concept that justice is blind.  This didn't make sense to me as a kid because I always wondered how Justice could see the criminals if she was wearing a blindfold.  But as I grew up I realized that Justice needs to be blind not in the physical sense of not seeing, but in the sense that everyone should get treated the same way regardless of gender, race, economic level, sexual identity, sexual preference,...

But Brock Turner, as well as the Ethan Couch, the "affluenza" teen who killed four people while drunk driving, show that Justice is not as blind as we'd like her to be.  These young, white, heterosexual males got a pittance, a slight slap on the wrist, for committing horrible crimes. While people debate whether or not a cop has the right to shoot at young black men for lessor crimes, or even no crime at all, young white men get told "Naughty, naughty.  Don't do that again."

This is the extent in which racism and wealth have corrupted our legal system, allowing white and/or rich people to follow different standards from the rest of society.  Justice is not only not blind, but she now takes notes about you and your various statuses before contemplating what to do next.

The big question is - how are we going to fix this? 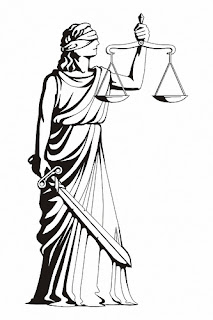