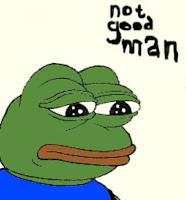 ADL Puts Pepe The Frog in their Hate Symbol Database

I looked into it, and found Pepe the Frog's entry on the ADL website.  It's rather long, but at the end the ADL includes this disclaimer:


However, because so many Pepe the Frog memes are not bigoted in nature, it is important to examine use of the meme only in context. The mere fact of posting a Pepe meme does not mean that someone is racist or white supremacist. However, if the meme itself is racist or anti-Semitic in nature, or if it appears in a context containing bigoted or offensive language or symbols, then it may have been used for hateful purposes.

Ummmm,  yes?  Of course you need to use your brain to determine if something is bigoted or offensive.  That's because anything can be used in a bigoted, racist, or otherwise offensive manner.

After reading this disclaimer, I decided to look further into this hate symbol database.  You know what else I found?  More "symbols" that inherently have nothing to do with hate:

This doesn't list all of the not truly hate related symbols, just the ones I remember off the top of my head.  And most of them list the same disclaimer as Pepe the Frog.  This bothers me deeply, because the ADL is allowing white supremacists or other jerks to dictate how we as society view and classify various signs of written communication.

Just because someone decides to use a random symbol in a hateful message does not make that a hate symbol. 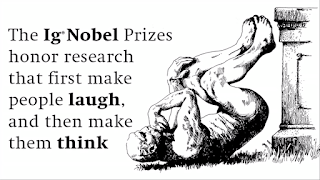 Yes, it's that time of year again when Improbable Research (from Harvard) awards prizes for some of the strangest, funniest research out there.  The winners this year include:


I suggest you head over to the Ig Nobel website and read the list of winners for yourself.