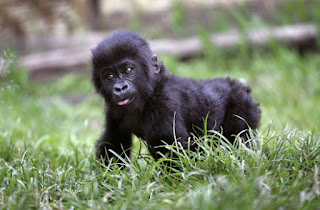 There is No Harambe McHarambeface

Last week, online newspaper and other media outlets carried a story about a Chinese zoo attempting to name a baby gorilla.  This zoo supposedly held a poll and asked the Internet to suggest and vote for a new name.  The overall winner was... Harambe McHarambeface.  The Chinese government decided to use a different name for this baby gorilla's Chinese name, but allowed Harambe McHarambeface to be its English name.

While this is a nice, lovely story, it never happened.  Someone just punked the media by publishing a fake news story in a fake newspaper.  And instead of checking out this story, people simply passed on the fake news.

*sigh*  And they wonder why people don't trust media these days.

The idiocy of the entire campaign blows my mind.

But I could at least understand a ban against pornography here.  Of course, I also believe that the religious freedom fighters would get rid of the ban faster than you can say "pornography" because a plus for living in America is freedom of speech.

from The Moscow Times

Rest in Peace, Ms. Arquette.  We've got your back.