The Importance of Being Earnest (when voting)

I have purposefully avoided talking about the election this year because in my honest opinion there is too much media coverage, too much speculation, too much gibberish, and not enough useful debates.  But I've noticed something happening that needs attention.

While I enjoy a good joke, especially political jokes that don't target a specific person, I think that it can go too far.  I saw a petition trying to add Cthulhu to the presidential ballot (because why vote for the lesser evil when you can vote for the greater evil?). There is also a great meme going about the Internet: 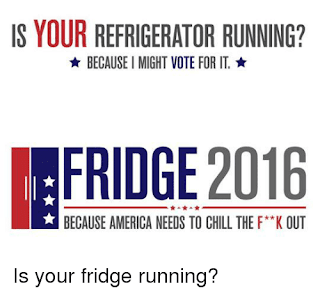 These jokes act as a vent for people wanting more palatable choices for president.  It feels nice to laugh along with others; I laugh too.

But when November rolls around, I ask that you vote in earnest.  I know it's tempting to do a write in vote for Bugs Bunny, Stewie  or Peter Griffin from Family Guy, Elvis Presley,... in order to send a message to the establishment that you don't like what's going on.  Just like it's tempting to vote for one of the few minor political parties for the same reason.

But I ask you - is it worth it to risk a Trump presidency?

More than one British person stated after the Brexit vote that he or she voted "yes" to send a message and not because of a desire to leave the E.U.  Look how that turned out.

Just please think about who you are voting for this year, and remember that each vote does count.