Those who cannot remember the past are condemned to repeat it.
- The Life of Reason (1905), George Santayana

France Gets a Clue

Yesterday I wrote a brilliant article on France and the banning of the burkini in terms of how this legislation parallels various points in history where government tried to control religion.  Sadly, this almost always leads to violence of some flavor.

So imagine my surprise when I read the headlines this morning:

I supposed that after all the brouhaha with the police asking the lady at the beach to remove her burkini top, the French government (or at least the court system) decided that trying to ban clothing based on religion actually steps on personal liberties.

Maybe we can learn from the past. 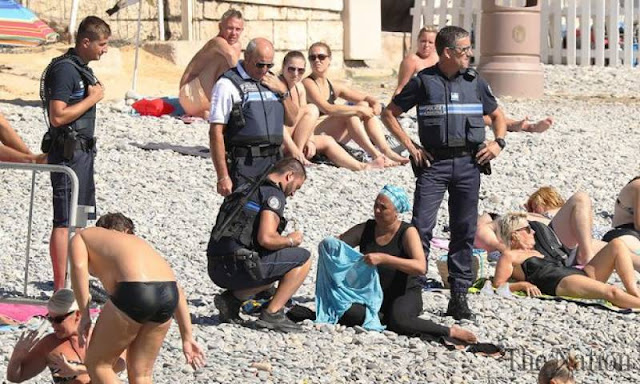 Sony, maker of the Playstation line of consoles, recently began a service called Playstation Now, which allows anyone with a Windows PC to play Playstation 3 games online.  The list of over 400 games includes ones that previously were exclusive to the Playstation.

I see this move as strategic on Sony's part.  In a time when more and more people are dropping their cable or satellite subscriptions to only view TV through the Internet, it makes sense for a gaming company who previously relied on specific hardware to move to an online platform.  The only problem might come from the price tag.  At $19.99 for a month or $44.00 for three months, the service costs more than Netflix, HuluPlus, Amazon, or Gamefly.

Heroes of the Week:  Tom Hiddleston and Chris Hemsworth

These two actors took a break from filming the next Thor movie to visit a children's hospital in Brisbane, Australia.

Well, loki who visited us tonight. Thank you @chrishemsworth and @twhiddleston for creating some superpowered memories for our patients! And a shoutout to the Children's Hospital Foundation and @juicedtv for making it happen. Repost @vonw #hammertime #thor #chrishemsworth #tomhiddleston #ragnarok #marvel #godofthunder #thornado
A photo posted by LadyCilentoChildrensHospital (@ladycilentochildrenshospital) on Aug 23, 2016 at 3:39am PDT