We Need To Stop Institutional Racism 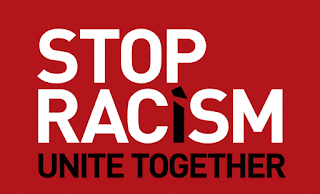 Institutional Racism:  any system of inequality based on race.

In my opinion, racism is immoral.  People are people, regardless of where they come from or who their ancestors are or what they look like.  In fact, the amount of DNA responsible for how a person looks is infinitesimal compared to our entire genome.  So, really, who cares?

Sadly, a lot of people do.  I think part of a person's racism comes from their environment.  If a person grows up around racists, that person will pick up racism, similar to how the children of smokers tend to be smokers themselves.  Also, if a person grows up in a homogeneous environment, for example a neighborhood where everyone is either black, white, Latino, Asian,..., it is easier for that person to believe rumors and rhetoric about other races.

I don't know what we as a society can do to directly stop individual racism.  I mean, I have a few ideas, but nothing substantial.  On the other hand, I do think that we can do something about institutional racism in our country.

Institutional racism, you ask?  Wasn't that outlawed in the 1960's?


I know of at least three cases in our current society where institutional racism thrives.

1.  The punishment for Cocaine

Powered cocaine and crack cocaine are two forms of the same drug - benzoylmethylecgonine. So it would be logical to assume that our legal system deals with these two illegal substances in similar fashions, right?

Wrong.  Possession of powdered cocaine carries light or no jail time, with rehab and community service standard consequences of legal actions.  Possession crack cocaine, on the other hand, carries heavy jail time.  The legal system acts as if these are two completely different categories of drugs.  But the biggest difference between powder and crack is that white people tend to use powdered cocaine while black people tend to use crack cocaine.

The disparity in punishments astounds me.  It is the equivalent of giving away iced water to white people, but charging black people for boiled water.  But this instance of racism won't go away unless we the people do something about it.

2. Getting Stopped for Walking in Your Neighborhood

The law has a concept of a high-crime area.  The police and the courts label whole streets and neighborhoods with this, and the outcome is a serious loss of liberties.

If you walked down the street in my neighborhood or on the sidewalks in adjoining streets, you have the right to walk unmolested.  A police officer might ask you to stop, but if he doesn't have due cause, you can just keep walking.

If you walked down the street in what the police label a "high-crime area", the police can stop you, frisk you, and ask a bunch of questions with no due cause and no justification.  You don't have the right to keep walking until the police tell you that you may leave.

During World War 2, the returning soldiers were told that the government would help them buy houses, as part of their compensation for the time they spent serving the country.  Whole towns were built with government funds, and white soldiers began a new life.

But all of the new towns had stipulations denying black soldiers the right to buy a house.  In fact, black soldiers could only get houses in previously black neighborhoods.

As time went on, the provisions against non-whites were challenged in the courts, until the Supreme Court finally said that no one may discriminate against a person buying a house based on race.  But by that time, the white soldiers had increased their net worth while the black soldiers lacked the opportunities.  As the white neighborhoods got older, the white people moved out and the black people moved in.  But the houses were very old, the tax base was poor, the school system was old, and the poverty continued.

Now, we have generations of white people who have moved to the suburbs, buying new houses, giving obscene amounts of money to local schools, and buying up vacant property for parks.  Meanwhile, the black generations have poor schools, old houses, and junky vacant lots.  Poverty begets more poverty.  Lack of education in the parents translates into no respect for education in the children.

Now we have a choice.  Do we turn a blind eye to the situation?  Or do we at least attempt to change the way our society works?

I, for one, think we need to do something.  We need to change how the laws treat cocaine users, regardless of the method of ingestion.  We need to get rid of the "high-crime" label and finally allow people to live their lives without the fear of police interrogation just for walking down the street.  And we need to begin to find ways to end the generational poverty.