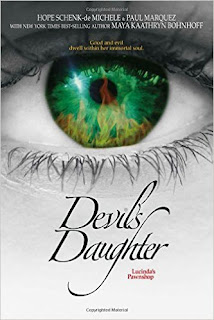 Today, I have a special post to share with you.  Recently, I spoke with Hope Schenk-de Michele and Paul Marquez, two of the three authors behind the book, "Devil's Daughter:  Lucinda's Pawnshop".  I interviewed them about the book and themselves, and we had a remarkable conversation.

Hope Schenk-de Michele and Paul Marquez have been best friends since either kindergarten (according to Paul) or college (according to Hope).  What we do know about Hope and Paul is:

Paul has worked in television and film production for the past several years (or maybe decades?), as the executive vice president  of operations for Wilshire Court, a Viacom production company, and as president of Paloma Productions, a production company specializing in dual language productions.  I looked Paul up on IMDB.com, and found him as a producer for the movie "El Grito".


Alas, due to technical difficulties I could not record our interview.  So instead of transcribing our phone call, I will relate their answers to you.

Here's the setup:  Hope called Paul, then conferenced me in.  As the virtual center of the call, Hope's voice came through loud and clear.  Paul sounded a bit muted, though his enthusiasm and energy flowed through when speaking about Lucinda, the main protagonist.

1.  When did you start writing?


Neither Paul nor Hope have written books or literary works of fiction before now, though both have contributed to screen plays for television shows and films.

2.  What kind of books do you read?  Do you like science fiction or supernatural stories?

3.  How do you write a book together?  Who does what part?


Well, Hope and Paul worked on "Lucinda's Pawnshop" for over 10 years.  They met every Sunday morning at 10:00 am, went over the week's revisions, talked out ideas for the plot and characters, and then wrote more together before figuring out who would work on what the next week.   So in a sense, they both did everything in the book.

Honestly, I have no idea how they managed this, but Hope made it sound easy and companionable.

4.  How did you come up with  the idea behind your novel?


Paul answered this question.  In his mind, the story of Adam and Eve getting kicked out of Eden did not make sense.  Why would God care about a piece of fruit?  So Paul created a sin he considered worthy of the punishment - adultery.  Lucifer tricks Eve into having sex, impregnating her with his daughter, Lucinda.


After working on Lucinda and her story for 10 years, Paul and Hope happened to speak to a mutual friend about their story, asking if he thought it would work better as a T.V. show or a film.  The friend replied that Lucinda would make a better novel, and introduced Paul and Hope to Maya Kaathryn Bohnhoff.  Being a professional writer, Ms. Bohnhoff assisted in turning their script into a novel.

6.  Will there be more books in the series?


Yes!!  Hope confided that the second book is ready for publishing.

7.  What was the hardest part of writing the book?


I laughed when Hope answered, "The marketing!"  As a published author, I must agree. Writing a book is much easier than marketing a book.

8. Do you listen to music when you work?  If so, what kind of music?


Neither Hope nor Paul listens to music.  Hope said that she can't work if there is noise in the room.  I know what she means - I find myself to distracted if I can hear someone else.

9.  What happens now?  Will Lucinda and Nick be happy together?


Sorry, but Hope and Paul refused to answer any questions about future plot.  I am both relieved because I love surprises, and disappointed because I want to know more about these characters.

10.  Who is your favorite character in the book?


Hope - Nathaniel, the fallen angel
Paul - Lucinda
Me - Nathaniel (We actually discussed this for several minutes.)

If you get a chance, I hope you read "The Devil's Daughter: Lucinda's Workshop".  The machinations and Machiavellian maneuvers provide a wonderful counterpoint to the characters in this tale of good v.s. evil.