How to Improve Gun Control: A Clarification 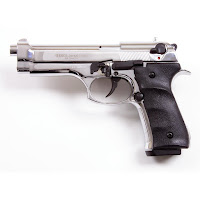 After a few interesting conversation, I decided I need to clarify my earlier post about gun control.

First, I know that "well-regulated" means a well trained militia.  That would be accomplished through the licensing process.  In order to obtain a license, a person needs to show a complete understanding of the weapon, the ramifications of using said weapon, and the law pertaining to the weapon.  The range test would be a practical test, just like the road test is for a driver's license.

Side note:  I think the overall license fee needs to be small, such as $10, regardless of which weapon you want a license for.

Second, the militia class weapons would have strong requirements so that every Tom, Dick, and Harry cannot just load up on automatic weapons and tanks.  I think it is reasonable to required a person wanting to fly an Apache helicopter to have been a helicopter pilot in the Army.  In fact, I think the majority (if not all) of the arms in the militia class would only be available to those who served in the military where he or she received the appropriate training for said arm.

Another side note:  One of the biggest problems I see in our current police forces is that these men don't have gun discipline.  Guns are never to be used to intimidate, and an officer should generally not pull out a gun as a means to control a situation.  Why?  Because that limits the officer's actions to backing down (by putting the gun away) or shooting.
Posted by Katfrog at 8/12/2015 04:03:00 PM