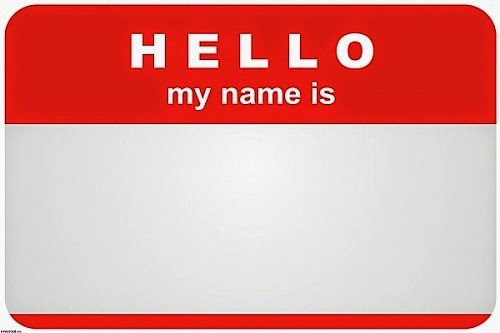 
1 a : a word or phrase that constitutes the distinctive designation of a person or thing
b: a word or symbol used in logic to designate an entity
2 a descriptive often disparaging epithet <called him names>
3 a : reputation <gave the town a bad name>
b : an illustrious record : fame <made a name for himself in golf>
c : a person or thing with a reputation
4 family, clan
5 appearance as opposed to reality <a friend in name only>
6 one referred to by a name <praise his holy name>

Such simple words for such a complex idea.  Names are more than simple words; names are how we interpret the world around us.  Helen Keller learns to speak when she understood the hand movements where the name of water.  In ancient times, the Egyptian god Ptah created things by naming them.  In science, naming rights reflect who either thought up an idea first or who implemented an idea first/the best.   Neil DeGrasse Tyson does a phenomenal job explaining how we interpret history through naming rights.


Fairy tales such as Rumpelstiltskin show how knowing a person's name gives you a power over them (or at least that's what we used to believe).  Today, people name their children to connect future generations with past generations (through the use of familial names), or to reflect a parent's wishes or dreams for their progeny (e.g. naming a child 'Lucifer' because you want him to be beautiful and able to think for himself), or to remember their culture heritage.  Studies show that men with feminine sounding names have more peer problems in school; that people with unusual names have a harder time getting hired.

What does this have to do with feminism?


The name 'feminism' is a word used in logic to designate an idea.  The word appears around 1851 with the meaning 'the quality of being female' or 'the state of being feminine'.  In the early 1900s, 'feminism' took on new meaning with the women's suffrage movement, now denoting a social theory or political movement that states we need to remove legal and social restrictions on women to allow them equality to men.

Over time, the word 'feminism' changed definitions as women's rights moved forward.   Women now have rights that at one point were reserved for men, such as the right to own property, the right to vote, the right to an education, the right to work, ...  Socially, women shed previous restrictions on clothing, mannerisms, sexual behaviors, reproductive rights, hairstyles, hair colors, ornamentation (e.g. jewelry, tattoos, piercings,...), career choices,... I think it's safe to say that the majority of legal and social restrictions have been removed.

This begs the question:  what does feminism mean today?

Some women claim that feminism still refers to gaining equality between the genders.  But we already for words for that - egalitarianism or equalitarianism.  These names sound like movements for equality, whereas 'feminism' sounds like a movement only for women.

Some women claim that feminism refers to a movement dedicated to protecting women from domestic violence or intimate personal violence (IPV), rape, and harassment.  But IPV, rape, and harassment are not female problems; these are crimes committed by woman and men against men and women.  The name 'feminism' not only sounds like a movement especially to help women in these situations, but also ignores or belittles the half where men are also victims.

Some women claim that feminism refers to a movement aimed to equalize wages and promotions
between the genders.  There are several problems with this definition.  First, this feminism assumes that women choose the workplace over the home, and that more money and titles are required for happiness or fulfillment.  It overlooks the happiness of either stay-at-home moms, or women who consciously choose to balance their careers needs with their family needs.  Personally, I do not believe that money is the end-all, be-all of life.

Second, we already have a term for people gaining promotions and raises due to their personal contributions - meritocracy.  Turning again to the Merriam-Webster dictionary, meritocracy means a system in which the talented are chosen and moved ahead on the basis of their achievement.

Third, men and women are not equal in their natural talents.  For example, women tend to multi-task better than men; men have better hand-eye coordination that women.  Scientists use fMRIs to determine if someone has a male or female brain.  These differences mean that certain jobs will come more naturally to either women or men and will therefore lend themselves to the preferred gender better.  It's not a function of society, but of who we are.  In these cases, equality doesn't mean the same number of men and women; equality means the same opportunities presented to men and women.

Yet feminism seems to ignore these problem; the name suggests that women deserves more money and more promotions simply because they are women.

These definitions of feminism leads to another power of names - reputation.  Feminism gained a negative reputation along its history as more and more people see the movement as dedicated to obtaining special privileges for women.  The name itself leads to this reputation, since the focus of the word is "feminine" and not "equal".

Personally, I consider myself an equalitarian who believes in meritocracy.

The question now is - who are you?  And who are these feminists?  Do they really want equality?  Or do they want special privileges?

Email ThisBlogThis!Share to TwitterShare to FacebookShare to Pinterest
Labels: feminism