Ironically, police responded to the peaceful march with excessive police brutality and violence. 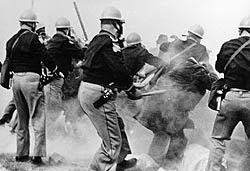 While bystanders took pictures and watched in horror, state troopers and local police officers attacked the people walking across a bridge, using tear gas and billy clubs, leaving people injured, unconscious, and bleeding in their wake.

Photos of the event rocked our entire nation, up to the White House.  People in other parts of our country felt shocked that such a heinous act could occur on American soil.  After a few more aborted marches,  on March 21st President Lyndon Johnson sent over 2,000 soldiers from the Army to accompany and protect the people marching from Selma to Birmingham.

The question is - have we learned our lesson?  Have we grown as a nation?

In my honest opinion, no.  No, we have not learned how to live with one another.

Traditional media, once a champion of the truth, showing pictures from Selma despite the repercussions on the white police officers, now work to hide the truth from the public.   They distract the public with fear-mongering, creating issues and potential threats out of figurative thin area.  Take, for example, the "Ebola" scare.  The Ebola virus is a big deal in Africa, where people wash dead bodies by hand, according to tradition.  Here, well, that's not really an American tradition, and it's not an issue at all.  For Ebola to spread, we would have to have regular people actively touching the dead bodies of the infected.

So why did traditional media act as if an Ebola epidemic could break out at any minute?

Maybe they don't want you to learn that a shop owner in Florida installed security cameras to catch the local police officers harassing his customers and employees.  In fact, the police cited an employee there 60 times for trespassing - at his job.

Maybe they don't want you to learn about all the times black people get harassed for walking down the street and not having identification.  Because, you know, in America you must carry identification when you go walking.  Otherwise, you're a criminal.

Maybe they want to convince you that illegal searching of a black person's vehicle is okay, because "if you have nothing to hide, then why can't I search it?"  The fact that it's against the Bill of Rights has nothing to do with the situation.  In fact, mentioning to a police officer that you have civil rights usually forces the police officer to get pissy.  I mean, you must be asking to be searched and must be hiding something if you try to reference your civil rights, right?

But the problem of anti-black racism cannot be solved through government alone.  We, the people, must make the effort to eradicate racism in ourselves and in our local communities.  We must look honestly at ourselves and root out our own racist attitudes, and work to not impart these attitudes on the youth of today.

Because that is the only way we can overcome the racism in our country.  By stopping, acknowledging when an incident happens, and working to ensure it doesn't happen again.
Posted by Katfrog at 3/10/2015 07:04:00 PM