Today, the world is in chaos.  Divers are still trying to find the missing people from the capsized ferry in South Korea, but hope dims with each passing minutes.  There is no hope for survivors from Malaysia Flight 370, only efforts to find answers.  An avalanche on Mt. Everest killed at least a dozen people.  The situation in Ukraine keeps getting worse, with anti-Semitic leaflets now adding visions of a new Nazi-like regime popping up.  Here in the U.S., studies show that every 65 minutes a military veteran commits suicide due to the lack of mental health care.  For those wondering, that means just over 61,000 vets commit suicide every year.

So today, I'm not covering these stories.  Instead, I searched for stories that show a bit of hope for the future, a future where humanity travels to the stars to begin a better life.  Stories about the weird and unusual here on earth, from new insects to some political comic relief.

To Outer Space, And Beyond!

First, SpaceX (Space Exploration Technologies) leased Launch Complex 39A at the Kennedy Space Center in Florida for the next 20 years. NASA agreed to the lease agreement last December, but you know how long it takes for the paperwork to go through.  Meanwhile, NASA will use launch complex 39B, twin to 39A, to send rockets to the moon and Mars.

Next, scientists discovered what they hope is a new moon forming out of Saturn's rings.  The moon, nicknamed Peggy, currently resides in the outermost rings, but scientists speculate that Peggy will move into her own orbit soon, assuming that the larger moons don't smash her into bits and Saturn's gravity doesn't just pull Peggy back into the rings forever.

Peggy joins the other 60+ moons around Saturn, including big sibling Enceladus, another moon that has scientists in a tizzy.  Due to several images from Cassini as well as unexpected flight data, scientists believe that deep beneath the surface lies an ocean the size of Lake Superior.  This finding means we have another potential place to colonize in our own solar system.

Speaking of other solar systems, astronomers at NASA found what they believe is an Earth-sized planet in the habitable zone around one of our neighbors.  Around 500 light years away, Kepler-186 is a red dwarf star with five planets.  The innermost four planets are too hot to support carbon-based life forms.  But the fifth planet, Kepler-186f, lives in the habitable zone, where water naturally occurs as a liquid on the surface.

This Week's "Say What?" Moment

While they're not alien, four new insect species in Brazil seem alien in that the females have penises and the males have vaginas.   Not only do the females have penises, but the penises have spikes on them that anchor into the male's vagina.  The female forces copulation until the male gives her his sperm in a handy nutrient-rich packet.  Mating takes between 40 and 70 hours - that's between 2 and 3 days! 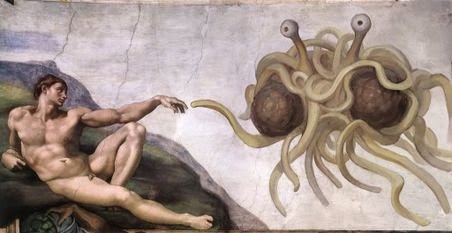 His Noodly Appendage Has Reach Out

Poland now officially allows the Church of the Flying Spaghetti Monster to register as a religion.  In 2013, a court ruled against the Pastafarians, but this week a judge invalidated the ruling.  This clears the path for the people of Poland to worship the Flying Spaghetti Monster, once the paperwork has been completed.  I'm not certain what this means for believers, except maybe they will get tax-exempt buildings or special license plates for their cars.  But I giggle every time I think about this.

On a side note, Christopher Schaeffer became (perhaps) the first publicly elected openly Pastafarian this past January, wearing a colander during his swearing in ceremony to the town board of Pomfret, New York.