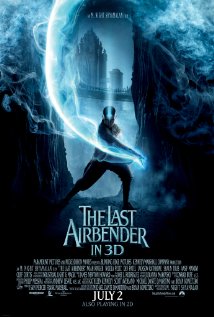 Every Saturday, we have a family movie night, when the entire family sits down, watches a movie, and then discusses the movie.  This past Saturday, we watched "The Last Airbender"  again.  Since I've seen the movie before, I used this viewing to understand my feelings. You see, the first time I watched the movie, I both liked and disliked it.  But I couldn't put a finger on the why.

Each scene in the movie, taken individually, is quite good.  The actors portray the characters in a fashion true to the original cartoons.  The special effects flow seamlessly with the actors' motions, adding to the story line positively.  The director even managed to generate and sustain a sense of urgency throughout the story.

But as someone who watched the original series, I felt disappointed by the omission in the plot.  This movie covers the entire first season of the show, and it does a poor job of it.  The conquest of the Great Library is at least three episodes in the show, with conflicts between Aang and the Fire Nation.  Yet in the movie, this event gets an honorable mention.  Plus, the movie lacks the growing connections between Aang, Katara, and Sokka.    While the three characters interact appropriate in every single scene, the movie as a whole lacks the flow between scenes and the sense of growing closer.  Similarly, while Aang is okay in every individual scene, the movie lacks the sense of loss and anguish that haunt him, lacks the depth of Aang that you find if you watch the series.

Ironically, if you haven't seen the original series, the movie still disappoints.  The plot depends in no small part on the viewer knowing the story before watching, because there are holes for people who have never seen the cartoon.