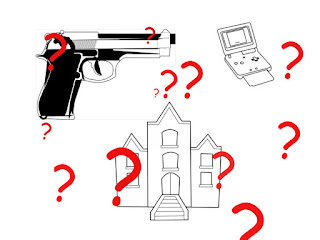 I want to discuss the shooting at the elementary school today.  When I first heard about the shootings, I wondered about the fallout for society.  Would politicians try to use the situation to pass more gun control laws?  While I support gun control, I felt like this would not solve the problem.

Is the problem a lack of security in the school systems, workplaces, or public areas?  No, we have reasonable security everywhere so far as I can tell.  If anything, some areas security has become obnoxiously invasion.  But I will stay off my TSA soapbox for now.

Is the problem violent video games?  I would say no, since there have been no scientific studies to support this claim.  Before you start commenting, “But Kathryn, I read this study...”  I do know that there have been a few small study cases that find a correlation with aggression and violent video games.  But to the best of my knowledge, there have no large scale studies (important because a larger scale removes the researchers’ bias more), and there have even been a few studies that show how a video game is played can change the correlation.

Is the problem gun control laws? While I do believe in reasonable gun control, I don't think any specific changes in the current gun laws would have stopped Friday's shooting, or any of the other shootings for that matter.  For one thing, the majority of the guns used in the shootings, over 80%, were obtained legally, with the vast majority begin semiautomatic handguns.  For another thing, the shooters are not sane, and you cannot legislate for insanity.  Even if none of these people could get a gun, they could have chosen to drive a car over people to kill them.  They could take a sledgehammer, baseball bat, or other blunt object and gone on a rampage.  Everything can be used as a weapon, if someone wants to, so removing guns from the equation will not solve the problem.

That bring us to what I think the real problem is - mental health.  Specifically, I think that we, as a society, ignore people with mental illnesses at the best, and condemn them as freaks at the worst.  We, as a society, are willing to let an individual with mental illness suffer in their life; we are willing to stand by and let someone fall, until it is too late to stop the catastrophe.

Mark Kelly, husband to Gabby Gifford, put it succinctly when he wrote:


We are a people who can watch a young man like you spiral into murderous rampage without choosing to intervene before it is too late.

I read a study done by Mother Jones about mass shootings in the past 30 years.  Of the 61 incidents, there are records of mental health problems for 38 of the shooters, and 42 of them, or just over two-thirds, committed suicide during the shooting.  This begs the question, how many of the remaining 19 also suffered from mental illness, but no one bothered to help them?

My statement about not legislating for insanity is only currently correct, because I also believe that social change engineered through legislation is the only viable solution.  We need to remove the social stigma associated with taking prescription medication for mental problems.  We need to offer real support services for those born with mental illness, to help them cope enough to live.  But we also need to find a way to help those people who were not born with a mental illness, but acquired problems in their childhood.  I’m talking about child abuse, both physical and emotional.  We as a society need to find a way to end child abuse.

I have no idea how to do this, especially considering how private and secret most child abuse is.  But if we really want to stop the mass shootings, we need to get rid of the real causes.
Posted by Katfrog at 12/18/2012 11:11:00 AM