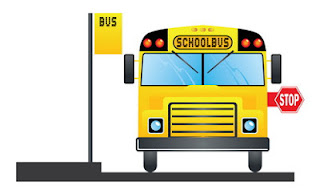 Last week, I saw a video where a woman driving a silver car drove on the sidewalk to avoid stopping for a school bus.  That's right - a woman drove up a daycare entrance and onto the sidewalk next to the daycare to go around the stopped school bus and around any other cars who stopped for the school bus.

The bus driver caught her sidewalk driving act a few times on his cell phone camera before contacting the school district.  The school district called the police, who sent an officer to watch the bus pick up kids and catch the idiot driver.  It worked; the video ended with a police car waiting for the woman, who received a ticket (and hopefully a lecture on safety).

Now we know that the woman is Shena Hardin, from Cleveland, Ohio.  We also know that last week a judge found her guilty of driving past a stopped school bus and of reckless driving.  The judge fined Ms. Hardin $250, revoked her driver's license for 30 days, and.... ordered her to stand on a busy intersection between 7:45am and 8:45am wearing a sign that says, "Only an idiot drives on the sidewalk to avoid a school bus."

I'm not certain if she cares about the money, and I am almost certain that she will continue to drive even with a revoked license.  But I hope standing on a corner with the sign will make a big enough impression to keep her from doing such idiot driving stunts in the future.