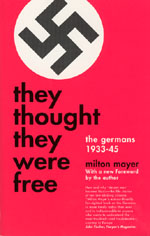 I happened upon a new book this week.  Well, it's not a new book; rather an old book that I had not heard of before.  "They Thought They Were Free" by Milton Mayer discusses what happened in Germany before and during World War II, but from the point of view of the people of Germany.

Reading a quote, I felt chills go down my spine.  The similarities between then and now are disturbing.  I momentarily thought about summarizing what I read and relating it to today, but you don't need me to do that.  So without further ado, a quote from "They Thought They Were Free":


What no one seemed to notice," said a colleague of mine, a philologist, "was the ever widening gap, after 1933, between the government and the people. Just think how very wide this gap was to begin with, here in Germany. And it became always wider. You know, it doesn’t make people close to their government to be told that this is a people’s government, a true democracy, or to be enrolled in civilian defense, or even to vote. All this has little, really nothing, to do with knowing one is governing.

"What happened here was the gradual habituation of the people, little by little, to being governed by surprise; to receiving decisions deliberated in secret; to believing that the situation was so complicated that the government had to act on information which the people could not understand, or so dangerous that, even if the people could not understand it, it could not be released because of national security. And their sense of identification with Hitler, their trust in him, made it easier to widen this gap and reassured those who would otherwise have worried about it.

"This separation of government from people, this widening of the gap, took place so gradually and so insensibly, each step disguised (perhaps not even intentionally) as a temporary emergency measure or associated with true patriotic allegiance or with real social purposes. And all the crises and reforms (real reforms, too) so occupied the people that they did not see the slow motion underneath, of the whole process of government growing remoter and remoter.

...
"Those," I said, "are the words of my friend the baker. ‘One had no time to think. There was so much going on.’"
"Your friend the baker was right," said my colleague. "The dictatorship, and the whole process of its coming into being, was above all diverting. It provided an excuse not to think for people who did not want to think anyway. I do not speak of your ‘little men,’ your baker and so on; I speak of my colleagues and myself, learned men, mind you. Most of us did not want to think about fundamental things and never had. There was no need to. Nazism gave us some dreadful, fundamental things to think about—we were decent people—and kept us so busy with continuous changes and ‘crises’ and so fascinated, yes, fascinated, by the machinations of the ‘national enemies,’ without and within, that we had no time to think about these dreadful things that were growing, little by little, all around us. Unconsciously, I suppose, we were grateful. Who wants to think?

"To live in this process is absolutely not to be able to notice it—please try to believe me—unless one has a much greater degree of political awareness, acuity, than most of us had ever had occasion to develop. Each step was so small, so inconsequential, so well explained or, on occasion, ‘regretted,’ that, unless one were detached from the whole process from the beginning, unless one understood what the whole thing was in principle, what all these ‘little measures’ that no ‘patriotic German’ could resent must some day lead to, one no more saw it developing from day to day than a farmer in his field sees the corn growing. One day it is over his head.

"How is this to be avoided, among ordinary men, even highly educated ordinary men? Frankly, I do not know. I do not see, even now. Many, many times since it all happened I have pondered that pair of great maxims, Principiis obsta and Finem respice—‘Resist the beginnings’ and ‘Consider the end.’ But one must foresee the end in order to resist, or even see, the beginnings. One must foresee the end clearly and certainly and how is this to be done, by ordinary men or even by extraordinary men? Things might have. And everyone counts on that might.

Email ThisBlogThis!Share to TwitterShare to FacebookShare to Pinterest
Labels: Milton Mayer, Nazis, patriotism, They Thought They Were Free, University of Chicago Press