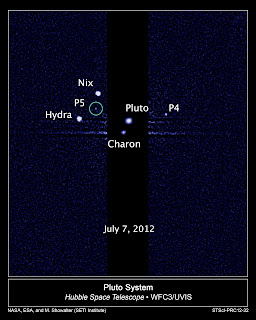 In a completely unexpected move, Pluto's moons recently began to threaten a NASA probe.  NASA launched New Horizons seven years ago, to travel across the solar system to study Pluto.  Everything looked okay, but now researchers and scientists wonder about all the debris left behind the moons and in Pluto's orbit.  After all, New Horizons, traveling at over 30,000 mph, can be either crippled or destroyed by something as small as a grain of sand.

Is this debris just a happenstance?  Or is there something more sinister going on?

Some people wonder if Pluto feels as though he's getting treated as a secondhand planet in the solar system.  Neptune led a protest group, saying "Look, I'm not saying that certain planets treat Pluto badly. But when Earth discovered his last two moons they couldn't even give them proper names. I'm just sayin'."

Neptune then released his controversial "Moon Discovery Timeline", which we present here in a simplified form:

After the release of the timeline, the protesters began to sing, "I'm Your Moon" and "Kumbaya".