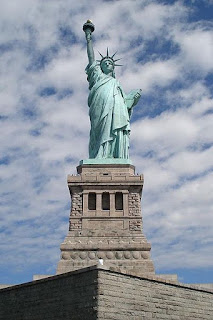 I have yet to post about Occupy Wall Street, because quite frankly there are enough people talking about the protests.  But I when I read about the situation, sometimes I think the general public does not realize that protests such as this are an integral part of American history.  In fact, we might still be a colony of Great Britain without people such as the protesters, willing to endure quite a bit of pain and discomfort to get a point across.

In the early 1700s, Great Britain basically ignored collecting taxes from the colonies, focusing it’s attention instead on the wealth of the Caribbean1. Then King George and the East Indies Trading Company decided to enforce taxes again, one of the triggering events of the American Revolution.  The colonists simply wanted what has become the American Dream - a chance to work hard for a roof over their heads, food, and comfort.  The colonist specifically did not want to work hard so that the East Indies Trading Company, the historically equivalent of Wall Street, could get even richer.

Then during and after the Industrial Revolution, the Robber Barons appear in history.  Andrew Carnegie, Cornelius Vanderbilt, Andrew Melon, J.P. Morgan2, John D. Rockefeller - these men ruled the financial world in the late 19th and early 20th centuries.  While these men indubitably helped create the great nation we are today, they used immoral practices to get what they wanted, treating employees as commodities, not human beings.  People protested as these practices undermined the American Dream, and change occurred.  We gained the 40 hour work week, child labor laws, and minimum wage laws from that time in history.

In the 1960s, Martin Luther King wanted the American Dream for everyone, not just white people.  His protests led to a more equal society, so much so that my children do not truly understand why black people were treated differently in the first place.

And now, the American Dream is threatened again.  Wall Street, as representative of the 1% who hold the vast majority of wealth in our nation, tricked the American people into thinking that we are all just “temporarily poor millionaires”.  Through cajolery, slight-of-hand, fear mongering, and immoral business policies, these financial turned our housing markets into one giant shell game for the world.

Only there was no prize under any shell.

Every shell held bad mortgages, with a large percentage of the mortgages pushed onto people with no visible means to pay them back.  The banks knew that they were profiting from deals that had to end in foreclosures, but that didn’t stop the money machine.   Their profit crumbled the American Dream into dusts for millions of people.  The protesters at Wall Street, and every other venue, simply want what our ancestors wanted over 200 years ago - a chance to live the American Dream.


1 The real pirates of the Caribbean appear in history here; several “pirates” were actually part of the British Merchant fleet acting with letters of marquis.
2 Ironically, the financial institute called J.P. Morgan seems to have picked up where the man, J.P. Morgan, left off.
Posted by Katfrog at 10/21/2011 04:34:00 PM