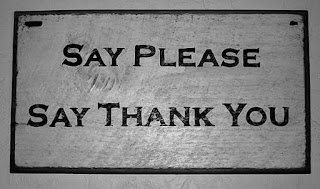 Last week, I read a blog by a friend of mine where she lamented the lack of manners and grace on social media sites.  After reading and commenting on her post, I began to think that despite the myriad of posts about Internet etiquette, otherwise known as netiquette, the concepts behind netiquette haven't permeated through society.  So I decided to add in my two cents worth.

The first rule of netiquette:  Don't say anything online that you wouldn't say in real life.

If you would criticize someone in real life over a comment/topic/whatever, then doing so online fits who you are.  But if you would not criticize someone in real life, then doing so online does not fit who you are.  I know that being online promotes a feeling of anonymity, but you are not anonymous.  People read and remember what you write, even if you never knew they read it.

Picture this situation.  Two women know each other through the local elementary school and become friends on a social media site, such as Google +, Facebook, or CafeMom.  The two women sit on the same PTA meeting, then woman A goes online and complains bitterly and extensively about the meeting.  Woman B reads her complaints, surprised because woman A seemed happy and excited at the meeting.  How much do you think woman B will now trust woman A?

The answer is not at all.  In fact, woman B will probably avoid woman A now because she doesn't want to read a rant about herself.

Interestingly enough, while a person who is nicer in real life and meaner online will get a reputation of either being two faced or hypocritical, the reverse is not true.  If you are more careful with your words online and more aggressive in real life, people don't see that as either two-faced or hypocritical.  In fact, I recommend being less critical/complaining/rude online, because you don't have the immediate feedback that a real life conversation has.

Email ThisBlogThis!Share to TwitterShare to FacebookShare to Pinterest
Labels: netiquette