Why I Say, "Bah, Humbug" To Traditional Thanksgiving 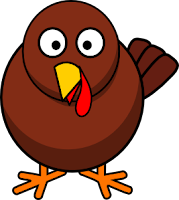 In less that a week, the vast majority of American families will get together, eat a huge feast, watch football, watch parades, and give thanks for their lives.  A few will discuss the story behind Thanksgiving that we all learned in elementary school.  But I feel like we as a country have not only forgotten the lesson of Thanksgiving, but I wonder if anyone really got it at all.

Why?  Because we, the new Native Americans, do not welcome people into our country with open arms.  We don't help others live, and we definitely don't share a large percentage of our food with strangers in a show of harmony.  What we do is persecute people who want to come to the United States; we greet people with suspicion and lots of questions.


Do you have a job or a visible means of support?
Do you have an education?
Do you have any sexually transmitted diseases, or any other communicable diseases?
Do you have family in the U.S. to help you out?
Are you bringing family with you?
If yes, how many?  Who are they?

Maybe we can blame our reluctance towards new people on the fate of the original American Indians, since history shows that nothing good happened to them after the Europeans arrived.  After helping the new settlers, more immigrants sailed over and began to kick the Native Americans out of their territory.  We brought over the flu and other diseases that acted as plagues.  We brought over alcohol, and destroyed lives with it.  We wiped out most of the Native Americans, stole their land, and polluted the environment.

In general, Thanksgiving marked the rise of the colonists and the downfall of the Native Americans.

Sorry, but I must say "Bah, humbug" to that Thanksgiving.

But I still have a Thanksgiving dinner.  What I celebrate is the ability of humans to share, to learn together, and to be kind to one another.  I celebrate the times when we rise above ourselves to help each other, to put another person ahead of ourselves and do what is right - to become the people that we want to be, if only for a moment.